Hats like any other dressing accessory have always been considered a style statement, what with the sheer number of variants that exist to suit different occasions and the societal importance that clings to each one of them. Back in the days, hats were a staple to a man’s attire, with very few people of class venturing out without a hat nestled on top. And in those times, fedora hats were seen more as an informal accessory while the stiff hats – like the ones worn by Abraham Lincoln – were seen as the in-vogue formal ones.

Times a-changin’ and the fedora gained prominence with a more formal vibe to it, so much so that a lot of people call out any hat that is worn in formal occasions to be a fedora. This can’t be further away from the truth. For starters, there are distinct features that separate a fedora from the rest – it can be identified by its snap brim, characteristic of its ability to be tipped down in front and also by the ridge on the crown that moves along to the front, with pinched edges complementing it on the sides.

One of the advantages that fedora hats offer to wearers is its ability to take any shape as needed, being a hat made of felt or straw in most instances – giving it the flexibility to mold to the wearer’s whims.

What needs to be understood here is the fedora is a style of hat, that is typically made with different materials and come in different shapes. So a discussion that pits the fedora hat against a Panama hat, is technically not up for argument as the latter is a type of hat, rather than a style like a fedora. Unlike the fedora variants, Panama hats are always made of straw, and are the product of the villages of Ecuador, being the native hats of the region for centuries before it garnered mainstream attention. Additional, Panama hats come in many different shapes and sizes from the classic fedora style, to the gambler style, and even newsboy styles. 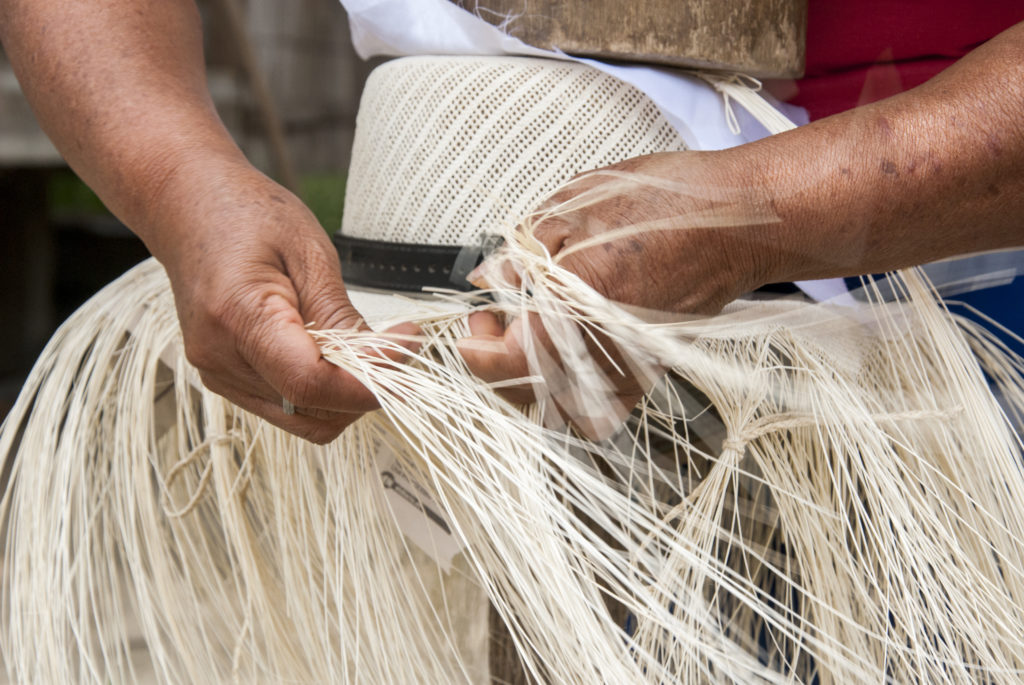 The Panama hat was thrust into the limelight in the early 1900’s when President Theodore Roosevelt came over to the Americas to inspect the construction of the Panama canal – with a then-unique hat perched on his head. Expectedly, the media glare fell on the hat and the surname of “Panama” stuck to it due to the circumstance of its sighting, albeit being a misnomer. Thus the Panama hat was born, and it was then when the cottage industries of Ecuador started bustling with international orders for their intricately woven straw hats.

The essence of a Panama hat is its straw meshed fabric, which is completely sewn in manually by expert weavers tracing their roots to families that have been in the trade for centuries. The straw to the hat comes from the ‘toquilla’ – a plant that resembles palm trees, with its leaves once dried and bleached, becoming the fiber for making the hat.

The process of selecting the leaves, drying, and bleaching them is both an impeccable skill and a tiring process, taking straw makers days on end to produce the finest fibers possible. These straws are then bundled and sent to the weaving houses, where expert craftsmen take months to perfect the hat, making every creation a distinct work of art.

Even within the Panama hat, there is an exquisite subdivision called the “Montecristi” which is essentially a Panama hat that requires a much higher scale of precision to weave – a level of skill that is difficult even for seasoned weavers to grasp. The Montecristi hats get their names from the vicinity where they are made, the town of Montecristi in the province of Manabi in Ecuador. A finished Montecristi hat has over sixty cogollos in them – with cogollos being the ribbon-like strands that move around the hat in concentric circles. Comparatively, a normal Panama has around thirty-five cogollos in them, which in itself is a difficult skill to master.

All this being said it should be evident that comparing a fedora hat with a Panama hat is akin to comparing apples and oranges – there just is no common ground to it. But what can be ascertained here is that a Panama hat is far ahead of the curve when pitted against a standard straw-fedora hat, as the former is not just a delicate piece of art, but one that is dipped in antiquity.

A Panama is a prized possession because every single hat that comes out of the weaving yard has the sweat of a weaver behind it – painstaking hours spent in pursuit of perfection. In times when machines and industries have all but eradicated a significant chunk of the cottage industries, the Panama hats continue to live on – both by the defiance of the Ecuadorian weavers and the appreciation patrons show these magnificent pieces of art.

How the Iconic Panama Hat Got Its Name

The name Panama hat often brings to mind images of sunshine and...